"La Belle Epoque" or "The Beautiful Era", a term adopted by the French to refer to the years between the Franco-Prussian War and the outbreak of World War I (1870-1914), expresses nostalgia for a time of (relative) peace, prosperity, and progress before the devastation of the "Great War". 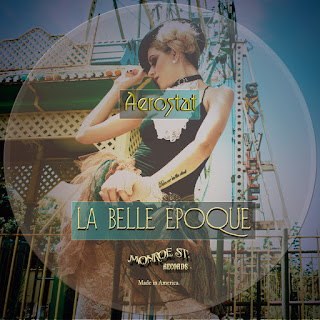 Throughout much of the Western world, these were generally years of economic prosperity, groundbreaking scientific and technological advancement, and innovation in art and music. La Belle Epoque coincides or overlaps the Victorian and Edwardian eras in Britain, the Wilhelmine era in Germany, the Porfiriato in Mexico, and the Gilded Age in America.

During this era, wealth and progress were publicly celebrated as never before. Inventors such as Thomas Edison and Alexander Graham Bell became household names. Fortunes were made in industries such as railroads, mining, banking, iron and steel production. Monuments such as the Eiffel Tower and Statue of Liberty were built, as well as lavish public buildings and private estates. 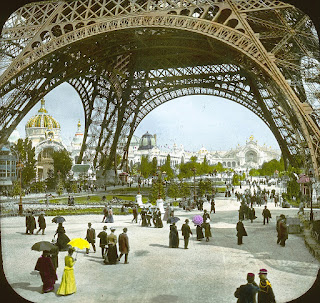 "World's Fairs" showing off the achievements of the participating nations included the Exposition Universelle (Paris, 1889 and 1900), World's Columbian Exposition (Chicago, 1893), the Brussels International Exposition (1897) and the Louisiana Purchase Exposition (St. Louis, 1904). Each of these events was a celebration of the past and present as well as the future; for example, the 1889 Paris Exposition marked the centennial of the French Revolution, while transportation was provided by an innovative 3-kilometer narrow-gauge railway. Major cities such as Paris, New York and Chicago also grew exponentially during this period both geographically and in population. 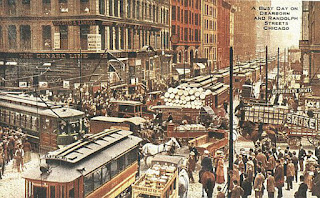 Innovators in Parisian art during this period include the painters Auguste Renoir, Henri de Tolouse-Lautrec, and Pablo Picasso. The Parisian avant-garde included composers such as Erik Satie and Claude Debussy, whose works are featured on Aerostat's "La Belle Epoque".

Although severe social problems and unrest still existed during this period, eventually setting the stage for the wars and revolutions of the 20th century, the optimistic and adventurous spirit of the era lives on in its art, music and literature, and continues to inspire generations.

For more background on this era, check out "10 Fascinating Facts about La Belle Epoque" at Five Minute History.

Heroicon, held May 4-6 at the Decatur Convention Center and Hotel, is a gathering of gaming enthusiasts that benefits the non-profit organization Games for Troops. This year there were a number of fictional and real life characters in attendance, including Iron Man.... 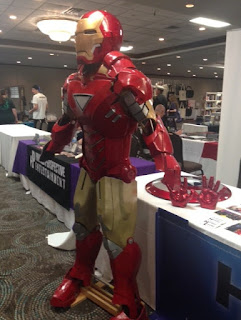 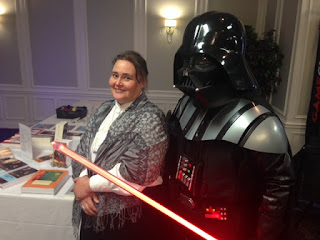 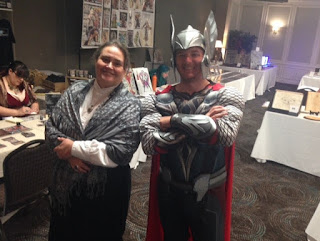 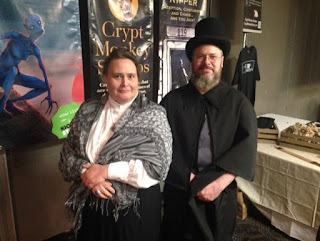 We also made a few new fans, including Jennifer (from Heroes of Legend Cosplay) and her soon to arrive son, who picked up a copy of our futuristic anthology Unto This Last. 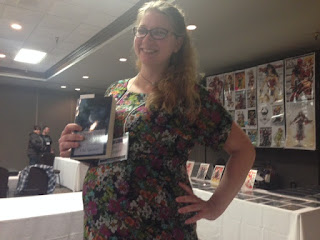 Vendors present included Play to Beat Brain Cancer, from Olathe, Kansas, a non-profit that sells gaming items such as dice, boxes and bags as fundraisers for brain cancer treatment and research. Their website is ptbbc.org. 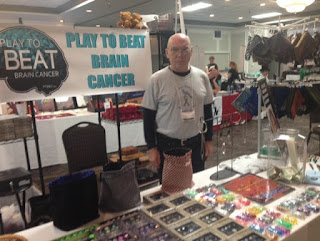 Heroes of Legend Cosplay, based in Decatur, stages appearances as Marvel, DC, Disney and other characters at venues such as parades, parties and children's hospitals. Their life-sized Iron Man and Wonder Woman costumes are quite impressive. If you'd like to hire one of their heroes, contact them at their Facebook page, https://www.facebook.com/HeroesOfLegendCosplay/ 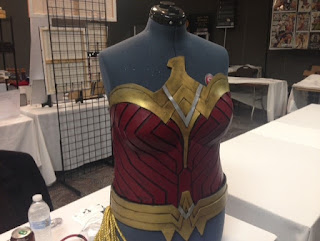 Also in attendance was GameChurch, a Christian ministry to gaming fans. As described by Rook (pictured), "we're here to tell you Jesus loves you and hand out free stuff" as well as overcome the perception that Christian faith and gaming don't mix. Its offerings included a summary of the Gospel of John in which the life and ministry of Christ are presented as the "ultimate quest to save a land known as Earth". 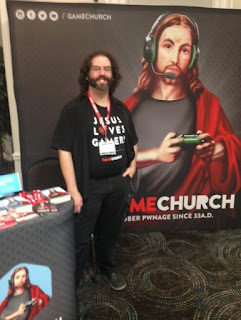 Our next event stop was Cog County Faire V, held June 1-3 at the White Lake Beach Resort near Montello, Wis., which we last attended in 2016. This event has an old-time county fair theme with vintage carnival games, a Victorian swimsuit contest, and live performances by musicians, storytellers, and others.

This event draws Steampunk fans from Wisconsin and neighboring states to enjoy some old-fashioned fun and show off their Steampunk gear.

Several Faire attendees bought copies of Angel of the Revolution and Syren of the Skies, including Jess, part of the Faire security team.... 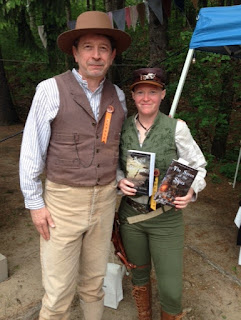 Gayle and Elliott, from Minneapolis-St. Paul.... 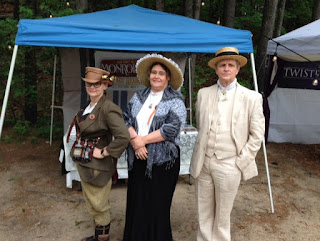 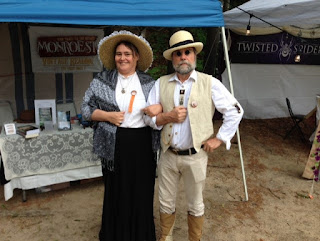 and Daniel, from St. Louis. 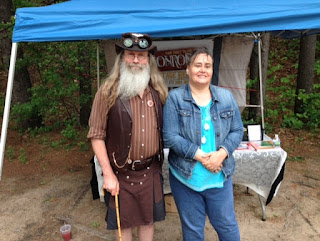 We enjoyed making new friends and catching up with old friends at these events. Our thanks also to the organizers of these events, who put a LOT of work into making everyone feel welcome.

Monroe St. Press' next event will be the Big River Steampunk Festival in Hannibal, Mo., on Labor Day weekend (Aug. 31-Sept. 3). See you there!

Posted by Bookworm at 4:26 AM No comments: