For those of you who enjoyed reading Around the World in 72 Days, Monroe St. Press has released another work by the indomitable Nellie Bly that explores a much darker side of Victorian America.

Bly, then 23 years old, had already left a newspaper job in Pittsburgh and in an effort to get hired by Joseph Pulitzer's New York World, proposed a daring story idea: she would pretend to be insane and get herself committed to the asylum so she could see for herself how its patients were being treated.

Under the name Nellie Brown, she checked into a boarding house, began acting "crazy" and claimed to have amnesia. Within days she had been hauled away by the police, declared insane by a judge and doctors and packed off to Blackwell's Island. For 10 days she witnessed, and experienced, the filth, neglect and abuse to which women patients were subjected by callous and largely untrained staff. 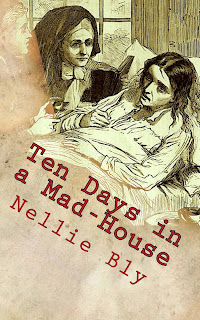 Her stories shocked readers, prompted improvements in the treatment of the mentally ill and remains a landmark in the history of investigative journalism.

Ten Days is priced at $5.99 and is available on the "History, Mystery and Miscellany" page at the Monroe St. Press website.

Our newest offering is Idle Thoughts of an Idle Fellow by British author Jerome K. Jerome (1859-1927).

Published in 1886, this collection of reflections on daily life in late Victorian England helped establish Jerome's reputation as a humorist, and contains many observations that are as accurate today as when they were written more than 130 years ago. 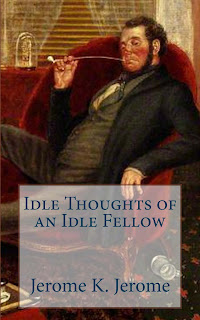 For example, in the very first essay, "On Being Idle," Jerome makes an important distinction between being idle and being merely lazy:

There are plenty of lazy people and plenty of slow-coaches, but a genuine idler is a rarity. He is not a man who slouches about with his hands in his pockets. On the contrary, his most startling characteristic is that he is always intensely busy.
It is impossible to enjoy idling thoroughly unless one has plenty of work to do. There is no fun doing nothing when you have nothing to do. Wasting time is merely an occupation then, and a most exhausting one. Idleness, like kisses, to be sweet must be stolen.

Other topics addressed in Idle Thoughts include food, drink, fashion, money, apartment hunting, weather, shyness, depression, pets, babies, and love. There are many reflections that are witty and poignant as well as humorous:

"Love is like the measles; we all have to go through it. Also like the measles, we take it only once. One never need be afraid of catching it a second time."
"Each of us have an inborn conviction that the whole world, with everybody and everything in it, was created as a sort of necessary appendage to ourselves. Our fellow men and women were made to admire us and to minister to our various requirements.... I fear we are most of us like Mrs. Poyser's bantam cock, who fancied the sun got up every morning to hear him crow."
"If you are foolish enough to be contented, don't show it, but grumble with the rest; and if you can do with a little, ask for a great deal. Because if you don't, you won't get any.... If you can feel satisfied with a hundred, begin by insisting on a thousand; if you start by suggesting a hundred you will only get ten."
"I think it is only to us in cities that all weather is so unwelcome. In her own home, the country, Nature is sweet in all her moods... Weather in towns is like a skylark in a counting-house—out of place and in the way."

The author, born Jerome Clapp Jerome in Caldmore, England, changed his middle name to Klapka, apparently in honor of a Hungarian military hero (Gyorgy Klapka). After dropping out of school at age 15 due to his family's financial straits, he worked for a railroad, joined a traveling acting troupe, and worked as a clerk and a teacher. His first reasonably successful book was On the Stage—and Off (1885), a memoir of his years as an actor. Idle Thoughts was published the following year.

His best known work is Three Men in a Boat (1889), a comical tale of a trip down the Thames River. Other works by Jerome include its sequel Three Men on the Bummel (1898), the autobiographical novel Paul Kelver (1902), and Diary of a Pilgrimage (1891). He also composed numerous essays, articles, and stage plays and published his autobiography, My Life and Times (1926), a year before his death at age 68.

Idle Thoughts is now available at our website.
Posted by Bookworm at 5:58 PM No comments: