Victorian Desktop Publishing: A Brief History of the Typewriter

The following is the script for a seminar I had planned to present at the Big River Steampunk Spring Faire.


The Victorian Era or the “Belle Epoque” was, as we know, an era of world-changing inventions.... the telegraph, telephone, photography, automobiles, phonographs, electric lighting, etc.  One of those inventions that doesn’t get a whole lot of notice these days, but which still influences our lives and is enjoying a bit of a renaissance, is the typewriter. 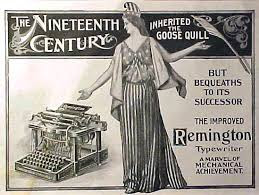 Advertisement for Remington brand typewriters at the turn of the 19th/20th centuries.

As with the automobile, telephone, and telegraph, a number of people contributed insights and inventions that eventually resulted in ever more commercially successful instruments. Historians have estimated that some form of typewriter was invented 52 times as thinkers tried to come up with a workable design.

The first patent for a device similar to the modern typewriter was issued in England in 1714 to one Henry Mill. The patent documents describe the device as “an artificial machine or method for impressing or transcribing of letters...  whereby all writing whatsoever may be engrossed in paper or parchment so neat and exact as not to be distinguished from print”. Mill touted the device as being “of great use in settlements and public records” since the impressions it made were “deeper and more lasting than any other writing, and not to be erased or counterfeited without manifest discovery.”

In 1802, Italian Agostino Fantoni invented a typewriter that would enable his blind sister to write. Six years later, another Italian, Pelligrino Turri, invented a typing machine that used carbon paper. In 1829 American William A. Burt patented a machine called the “Typographer” that used a dial rather than keys to select characters. While this device is sometimes described as the “first” typewriter, Burt never found anyone willing to produce it commercially — probably because it worked slower than writing by hand.

By the mid-19th century, the increasing pace of business communication had created a need for mechanization of the writing process. Stenographers and telegraphers could take down information at rates up to 130 words per minute, whereas a writer with a pen was limited to a maximum of 30 words per minute. Numerous attempts to develop viable printing or typing machines were made in Europe and America, but it was not until the 1870s that inventors finally came up with a model that enjoyed any kind of commercial success. 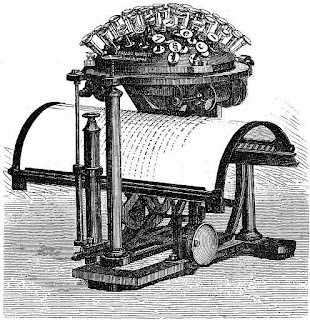 The first was Rev. Rasmus Malling-Hansen of Denmark, who invented a machine known as the Hansen Writing Ball.  He developed his device by making a porcelain model of the keyboard and experimenting with different placements of the letters until he found a configuration that yielded the fastest writing speed.  The Hansen model was the first typewriter that was able to produce text faster than it could be written by hand. It won first prizes at the Vienna Exhibition of 1873 and Paris Exhibition of 1878 and was still being used in offices in London as late as 1909.

However, the first typewriter to enjoy significant commercial success was invented by three men from Milwaukee — Christopher Latham Sholes, Carlos Glidden and Samuel Soule. In 1868 Sholes, Glidden and Soule were granted a patent for “a new and useful improvement in typewriting machines.” 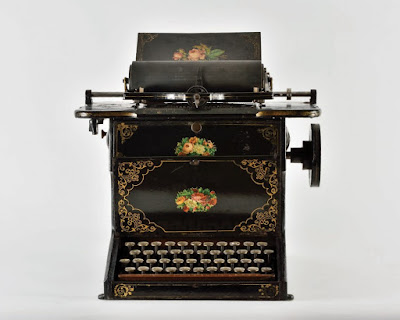 The Sholes-Glidden Typewriter produced by Remington in 1873.

Their prototype was adopted by Remington & Sons, then known for making sewing machines, which began producing them in 1873. This machine was the first to have what is known as a “QWERTY” keyboard in which the letters in the top left row are Q,W,E,R,T,Y. The placement of the letters was designed to keep the most frequently used letters as far apart as reasonably possible so that the machine would not jam.  This configuration eventually became the standard and remains the standard today for electronic keyboards.

One major difference between 19th century and 20th century models was that in the earlier models, the typebar was located under the platen and the user could not see what he or she was typing until several carriage returns brought the text into view. The Underwood company came out with a frontstriking or “visible” typewriter in 1895; this model also helped popularize the four-row keyboard with numbers and symbols at the top. 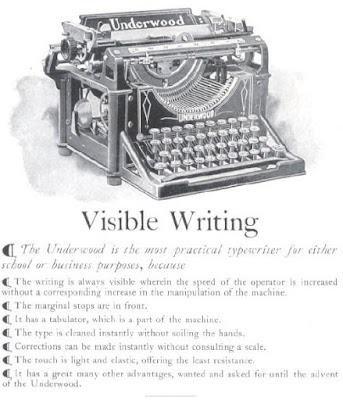 At the turn of the 19th/20th centuries, keyboard typewriters such as the Remington model had some competition from  “index” typewriters that used a pointer or stylus to choose letters from an index. Although slower than keyboard machines index typewriters were, at first, lighter, more portable and less expensive to produce. But index typewriters never moved beyond a niche market and by the 1930s they were no longer being produced — at least in the English-speaking world; they are still used in Japan and China. 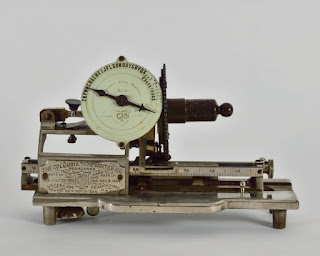 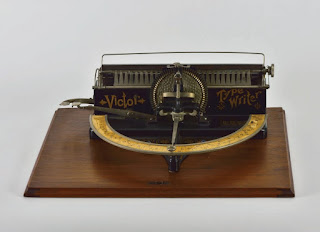 By about 1910, the "manual" or "mechanical" typewriter had attained the standard design still familiar to many today.  Each key was attached to a typebar that had the corresponding letter molded, in reverse, into its striking head. When a key was struck the typebar hit a ribbon (usually made of inked fabric) and made an ink mark on paper wrapped around a cylindrical platen. The platen was mounted on a carriage that moved left or right,  and the paper is advanced vertically by the carriage-return lever into position for each new line of text. A small bell goes off a few characters before the right hand margin to warn the operator that it was time for another carriage return. Other familiar features such as tabs, margins stops and shift keys had also become standard — and so had the loud clickety-clack of the typebar striking the paten. 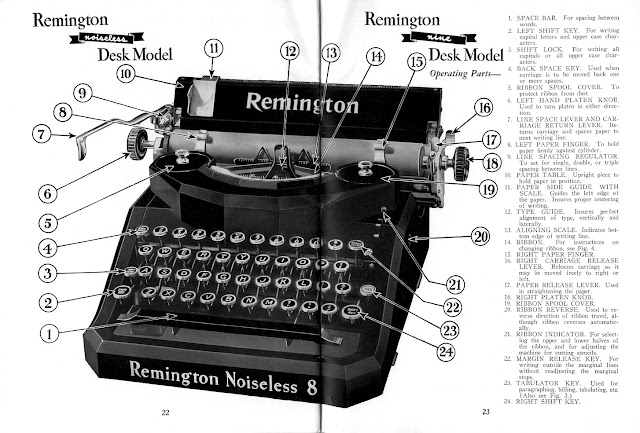 Ad for Remington Noiseless 8 model typewriter, with a diagram indicating each part.

The first “noiseless” or "silent" typewriter went on the market in 1917, produced by the Noiseless Typewriter Company and later by Remington and Underwood. Its main feature was a mechanism that slowed down the typebar so that it didn’t strike the paper and paten as hard; while it reduced noise it didn’t entirely eliminate it. Noiseless portables continued to be manufactured until the 1960s.

The basic groundwork for the electric typewriter was laid by the Universal Stock Ticker, invented by Thomas Edison in 1870. This device remotely printed letters and numbers on a stream of paper tape from input generated by a specially designed typewriter at the other end of a telegraph line. The first electric typewriters that used a motor to power the typebar were created in the 1920s. In 1933 IBM bought the company that made them and IBM remained the leader in electric typewriter development for the rest of the 20th century.

Although typewriters were superseded by electronic word processors in the 1980s and the last Brother model typewriter rolled off the production line in 2012, antique typewriters remain in demand. Many writers prefer them for writing because they provide fewer distractions than computers hooked up to the internet, and because of the more tactile aspects such as the “thunk” of the keys, the “clack” of the typebar, and the “ding” of the impending carriage return. Even today the typewriter is known as the “thought machine”.

Originally I had planned to engage in a "type in" writing exercise using a manual typewriter and inviting others to bring their own typewriters. That did not work out, but the exercise is presented here for your edification and amusement....

A Do It Yourself Steampunk Story

(Your name) was born (time, place) and grew up in (place, dimension etc.) At an early age he/she was tutored in the art of (doing something odd) by Professor (name)(noun). In search of adventure, (your name) left (your birthplace) for (a far flung destination) where they met up with (noble title) (name) (noun) and (did something amazing).

Later, (your name) discovered that the dastardly Count (name) von (noun) and his mad scientist companion, Dr. (name) (noun), had built a fleet of unstoppable (adjective) (nouns) in their attempt to conquer the (name of place)-ian Empire.  With the help of scrappy companions (names of friends), (your name) improvised a fantastical (adjective) invention known as the (noun)-erator that (verb ending in “ed”) the Count’s plans for world domination.

(Your name) now lives in (somewhere fabulous and unusual) with their (living companions). When not writing a tell-all memoir or attempting to perfect (an invention/scientific endeavor), (your name) likes to (do some sort of unusual and creative hobby).
Posted by Bookworm at 3:24 PM